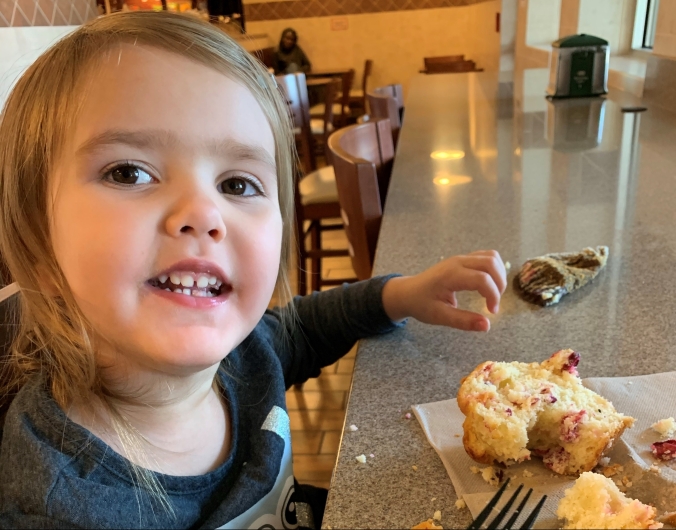 It always starts the same way. With a silly grin, Ruby Wren takes my hand, we walk through the big sliding doors together, and she starts saying, “Muffins … where are you? Muffins … where ARE you???” over and over again as we set off with an exaggerated tiptoe to go “find” the muffins hidden somewhere within our favorite little date spot.

Now, we do this partially because her two-year old imagination adores having pretend adventures, but mostly because, in what is probably some ingenious marketing ploy, this store seems to enjoy literally moving the muffin cart around periodically to different areas of the store.

Impulse shoppers beware … they have you in their crosshairs.

Admittedly, it was a bit worrisome for both of us the first time this “where did the muffins go?!?!” trauma hit us from out of nowhere. But now, solving this little mystery has just added a whole new level of anticipation to our fun little “muffin dates”. (And honestly it also helps that the store manager had promised this carb-loving duo that the muffins would always be there somewhere. Phew.)

No need to panic, Debi. I mean, Ruby.

Once we actually find the muffins, it’s traditionally Ruby’s job to then decide which one we’re going to split. After much consideration, “the chosen one” makes its way into a sack which she then carries all by herself (with some serious squishing involved that only makes the muffin taste better) up to the front of the store where Mimi pays and we grab two forks. Then we head outside to our favorite little table on the sidewalk to fuel up.

Well this is how it usually happens, anyways.

Unbeknownst to Ruby, the whole way through our latest muffin hunt the other morning, Mimi was silently dreading telling her that it was way too cold to eat outside that day.

This may not seem like a big deal to some but you have to understand that, in her beautiful two year old maturity, Ruby pretty much wants to do everything the same way we’ve always done it. In the same order. In the same place.

So yes … this current cold snap could mean some serious trouble to the harmony of our little muffin date. Because of this, I had braced myself for the impending tears as I led her away from the register over to the indoor tables, instead of heading outside as usual.

But that was when she spotted the long counter in front of the windows – the one with the really high up “big-girl chairs”. She totally forgot about sitting outside at that sight and instead ran straight over there and reached for me to lift both her and our prize-winning muffin up into place. I got her all safe and situated up there, opened the muffin up, then turned to get into my seat.

That’s when my peripheral vision noticed the dark shadow rising up in the back corner of the eating area (see them in the picture?). There had been someone sleeping on the bench back there and I did not see them as I quickly scanned the area, looking for the best place for us to sit.

I honestly couldn’t tell if this person was a man or a woman. I never did figure that out, actually. From a distance, they were just dark. And they just sat there with their head leaned against the wall, hood up, eyes closed, totally ignoring us.

As I continued to watch this person, I have to admit that my first thought was, “Oh, great.”

I just wanted a happy little muffin moment with my Ruby Wren, and we had finally gotten all situated to start enjoying it, and this person’s simple presence over there was now messing it up even more than the cold air outside ever could’ve done.

I honestly never felt like we were unsafe – the manager was actually sitting at his desk not far from where we were – I was just uncomfortable that this mysterious person was there, even though they seemed to want nothing to do with us.

As we continued to attack our muffin, I saw this person finally get up and go towards the bathroom, taking their backpack along with them.

After a few minutes, though – just as I started to relax again and enjoy my muffin – this person returned to their booth and sat back down.

It was this movement that finally caught Ruby’s eye. Their spot in the corner was actually behind Ruby’s left shoulder, so up until that moment, she hadn’t even known they were there.

But now she knew for sure.

After this, I totally lost Ruby’s attention. All she wanted to do was stare at that hooded person in the corner who sat there with their eyes closed, head leaning up against the wall again.

Well, after a few minutes, they must’ve felt Ruby watching them because they opened their eyes and I then saw Ruby’s cheeks crinkle up with a shy little smile for them.

This person’s eyes widened at this and their face melted into a huge grin that instantly softened them. This smile … it lightened and brightened them.

And honestly … it humanized them.

This was a person. Whose every breath holds purpose. And promise. They matter. They do. They belong, even if they don’t feel like they do. In God’s kingdom, we all belong.

It doesn’t matter if they’re man or woman. Black or white. Rich or homeless. Stable or struggling. Dreamer or abandoned without even a shred of hope. There is absolutely nothing and no one hopeless in God’s eyes – and I believe he used this person’s smile that day to remind me of this.

As I sat there thinking about this, I saw their hand rise up in a little wave at Ruby, then they leaned their head back and closed their eyes again.

As we were on our way out a little while later, they opened their eyes as we passed nearby. “Merry Christmas,” I said, “And, by the way, you have an amazing smile. It brightened up the whole room today.”

At that their face crinkled up into an even wider grin and they replied, “Merry Christmas, my friend!”

I smiled and as we turned to go, I then heard Ruby’s little voice quietly repeat, “Merry Christmas, my friend.” It was the sweetest sound ever.

“Let us not become weary in doing good, for at the proper time we will reap a harvest if we do not give up. Therefore, as we have opportunity, let us do good to all people, especially to those who belong to the family of believers …” (Galatians 6:9-10)

One thought on “On muffin dates and eyeballing that shadow in the back corner.”