The Gary I remember.

It was just a Tuesday morning earlier this summer – June 19th, in fact. The unit was full of doctors wanting status updates, and I’m that nurse who’s just trying to figure out what the heck is going on because I’ve been off for four days, and I’m still struggling my way back into that nursing reality. That’s when my cellphone rings. That’s when I learned that Gary had died. He was suddenly just gone.

If you’ve been following me at all, you already know that this has been such an unbelievably difficult summer for our family. First came our 30-year old son-in-law’s cancer diagnosis which sent our collective worlds spinning totally, ridiculously cockeyed (read When God just sees things different than Mama.).

Then exactly one week later, we got the call about Gary.

My husband’s younger brother had taken his own life.

How do you process all of this? Really … how do you process any of this? So much personal horror all hitting you at the same time – like a vicious, rapid-fire one, two punch? Believe me … it’s been a struggle for all of us (read When God just goes ahead and drops that bomb. and  Yeah, but can you sing? Like right now??).

A few months have gone by now and I find that I just can’t stop thinking about Gary.  I think that grieving the actual loss of Gary may have slipped through the cracks a little bit in my processing of how he died and the unbelievable timing of when he died.

But I miss him now. I really do.

And I feel like he deserves to be remembered. Today especially.

Gary played a huge part in our early life together as a couple. He was always just “there”. He and Ray shared a room when we were dating, and the three of us used to sit in that room for hours just listening to music and laughing about nothing. Just stupid, hilarious nothing.

After Ray and I got married, I’m pretty sure I drove Gary more than a little bit crazy. I was this 18-year old Yankee city girl suddenly married and living in a 12′ x 60′ trailer waaaaaaaaay out in the middle of “Backwoods, Mississippi” on what until recently had been an overgrown cornfield.

It may not look like much, but this was our first castle. We spent 11 years trying to turn that Mississippi red clay into a lawn. It spent 11 years laughing hysterically back at us.

At this point, Gary lived around the corner from us. He was a truckdriver who worked nights, and he had the weekday misfortune of being the only one within 20 miles who could come rescue me from those sofa-sized hogs who’d escaped from down the road. They were devouring my garden! Both Gary AND the local sheriff got a good laugh out of watching my city-girl hysteria as I tried to shoo them away. Apparently a strong, deep voice and a broom is all it takes. How was I supposed to know that?

And there was also that vicious parakeet of mine who could gnaw her way out of her cage, only to swoop around that tiny trailer terrorizing me for the day. Believe it or not, Gary actually got out of bed and came over to catch that crazy bird for me. And what I really can’t believe is that he did this more than once. And he lost a little blood each time. Yet somehow Ima Bird lived on. For years.

Then when the kids all started coming and our family really grew, Gary was just always around. Any time there was a family event, Gary showed up. Even when there was nothing going on, he still showed up. He just wanted to be near us. 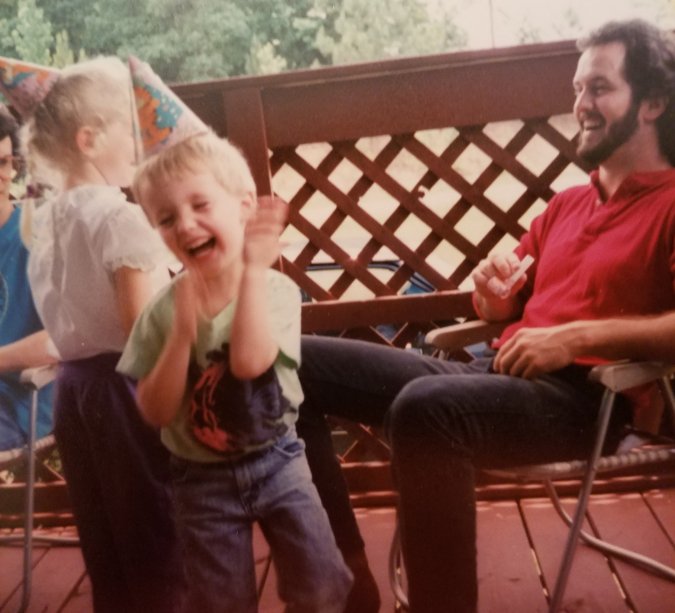 Gary was always cracking the kids up. His son, Wayne, and niece, Brandi.

Then, after 20 years of living in the same town, we moved our little part of the family up to the Pocono Mountains for a few years, and then here to Orlando in 2006. Even though, from this point on, we only saw Gary about once a year, he still called his brother once a month or so, just to catch up. He was just the best that way.

But now those phone calls have stopped. And we don’t really know why.

People who didn’t know the real Gary may not have always seen it, but he cared very, very deeply. Sometimes he didn’t like to show it, but I believe that Gary probably cared more deeply than anybody else in our entire family. Seriously.

But the morning of June 19th also made it abundantly clear to us that Gary also hurt very deeply, as well.

And now so do we.

All of us left behind. His wife. His son. His two daughters. His parents. His sister. His brothers. Their wives. All the nieces and nephews who thought he hung the moon.

We all hurt now.

We hurt wondering why.

We hurt knowing now how badly he must’ve hurt.

But, most of all … we hurt just missing Gary.

I keep thinking back to a conversation he and I had a few years ago on one of our visits home. We were sitting out on his back porch and he told me how much he loved sitting in that chair staring out at his backyard.

He told me that, as a truckdriver, he spent all day long with the world rushing past him as he drove. Hour after hour after hour everything just sped by.

But when he came home and sat in that chair … everything could finally be still. There was peace. There was healing.

I think of that conversation when I sit out on my own porch, needing the chaos of my day to just stop already. Gary and I were a lot alike that way. I totally, TOTALLY get his craving for stillness. Peace. Healing.

I pray you’ve found it now, my brother-by-love. I really do.

And by the way … Happy Birthday … we all sure miss you, Gary. And we always, always will.

“He will wipe every tear from their eyes. There will be no more death, or mourning or crying or pain, for the old order of things has passed away.” He who was seated on the throne said, “I am making everything new!” Then he said, “Write this down, for these words are trustworthy and true.” (Revelation 21:4-5)

Oh, how I long for that day.

7 thoughts on “On missing Gary.”