It was winter 2002 when our little family packed up our dog, hamster, two cats, and every little bit of our Mississippi charm, as we headed out on a crazy 4-year adventure of living high up in the Pocono Mountains of NE Pennsylvania.

For me to sit here today and say that life in our new rustic woodland paradise was just a little bit different from our beloved Southern comfort would be a hilarious understatement. Seriously hilarious.

Not only was it really (!!) cold up there, but there was also white, slippery stuff all over the place. 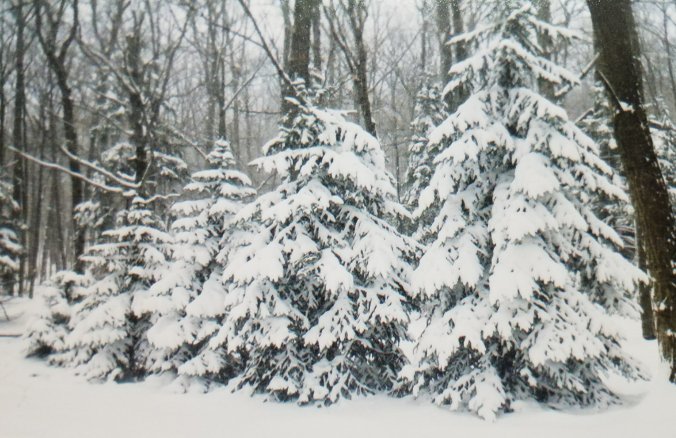 So pretty. So cold.

And, maybe it was just me … but people always seemed to be staring at us like we talked funny or something???

No … this is not a black & white picture.

Plus there was also the fact that we had absolutely NO idea how to drive on those icy mountain roads that somebody was thoughtful enough to curve around every giant rock, cliff, and waterfall in sight. This meant that the logical city road grids of our past were banished to just a sweet memory. There truly was no N/S or E/W roads here. Nope.

This also meant that we spent a lot of our first few months there hopelessly lost.

Lost both ways, too, because finding your way back home could be an even bigger problem than finding your way there. GPS & cellphones were useless for obvious reasons, snow squalls could come at any time, and leaving trails of breadcrumbs was pretty pointless because of all the hungry critters roaming around.

And, did I mention there were hungry critters roaming around? Everywhere.

When the deer weren’t staring into our windows like psychotic stalkers, they were relaxing around our yard like Mississippi hound dogs (we actually named a few of them). And sometimes they would even climb up onto our front porch to eat the pumpkins and Indian corn I had placed around ever so artistically. So rude.

The fun continued with opposums and squirrels racing around INSIDE our screened porch, raccoons dying under our concrete front steps, and various mice, birds, bats, and flying squirrels all creating their own special brand of chaos inside our home.

And let’s not forget the skunks. Not only were they gigantic, but they also commanded some serious respect, as well. These waddling balls of black and white fluff could cause a whole carful of adults to whimper in fear just by witnessing their late-night strolls that ran straight down the double yellow line on those twisty mountain roads.

Believe me, both time AND traffic stood still for them with no honking, no passing, and absolutely no inhaling. We just watched, waited, and respected.

Oh, and then there were the bears. Huge black bears that ate everything in sight and randomly popped up out of nowhere just to remind us that we were living in THEIR woods. I think they made a sport out of terrifying me. It got so bad at one point that I began to think I was seeing bears everywhere. Usually it turned out to be just a shadow or a big rock and then I would just feel silly.

Until that world-tilting evening when I got it backwards.

This time just as I was noticing a huge new rock a few feet away from me, I realized it actually had eyes and was staring at me. Did you know that there’s a huge distinction between seeing a bear in the woods and having a bear see YOU????

Yeah, that moment changed me forever.

My point with all of this is that everything was very different for us there. True, it was a fantastic, memorable experience, but the actual transition from our old life to our new was quite bumpy, at best.

I had a particularly tough time with all of it, which actually surprised me. I had moved around several times as a kid – I thought I knew how it was done.

You stepped out the door.

That’s how you joined a new community.

That’s how you made a new life.

Well, it turned out it wasn’t quite that easy for me. Even though we were now living in the most beautiful place I had ever seen, I found that I seriously missed what we’d left behind. I missed our family, our friends, our church, our tiny house on the hill, my garden, and our little hometown. Pretty much our whole life.

We had left our whole life back there.

But what was curiously most difficult for me, was that I missed the sound of my name being called out in a crowd. I missed turning around and spotting a smiling face looking my way. There were none of that in this new place. And it hurt.

I really missed just being known.

It’s interesting the situations that God will place us in to show us these things about ourselves. I have learned that He will systematically strip away every single stronghold we have until we see just how badly we’re absolutely missing the point.

My purpose – my entire sense of belonging and self-worth – had been coming from who I was to the people around me, not from who I was in Him. I had become so comfortable in the familiarity of my old life that I had failed to recognize this until He plopped me down smack-dab in the middle of the woods, and forced me to see Him.

I spent the next four years on the very slow journey of letting go of all the anxieties that grabbed hold when I was plucked from my beloved comfort zone. See, I thought I had trusted God before this move, but he was now showing me very clearly just how shallow my trust had actually been.

Slowly we built a beautiful life in those mountains with all the critters, frigid temperatures, and amazing people we still hold dear today.  They made us family at just the right time, and we, in turn, never let on that we knew how endlessly entertained they were by simply listening to us talk.

We’ve been here in warm, sunny Orlando for thirteen years now, but God has continued to show me that I still struggle with this sin of wanting to be known, and I still falter in situations where I’m not. Sometimes these feelings still bubble up and fight for control of my confidence.

And occasionally they still win.

For a little while.

But then He pulls me up onto His lap, wraps His amazing love around me, and reminds me once again to embrace that sweetest, most pure form of comfort that comes from simply walking in faith. Just trust, Debi. Not because of who I am, or where I am, but because of exactly WHOSE I am. Praise be.

Thanks for growing with me.

“Also, seek the peace and prosperity of the city to which I have carried you … Pray to the Lord for it, because if it prospers, you too will prosper.” (Jeremiah 29:7)

“For I know the plans I have for you,” declares the Lord, “plans to prosper you and not to harm you, plans to give you hope and a future. Then you will call on me and come and pray to me, and I will listen to you. You will seek me and find me when you seek me with all your heart. I will be found by you,” declares the Lord. (Jeremiah 29:11-14)

Our snowy Pocono house. Loved it. Still miss it.

2 thoughts on “On Southern drawls, and changing views out your kitchen window.”