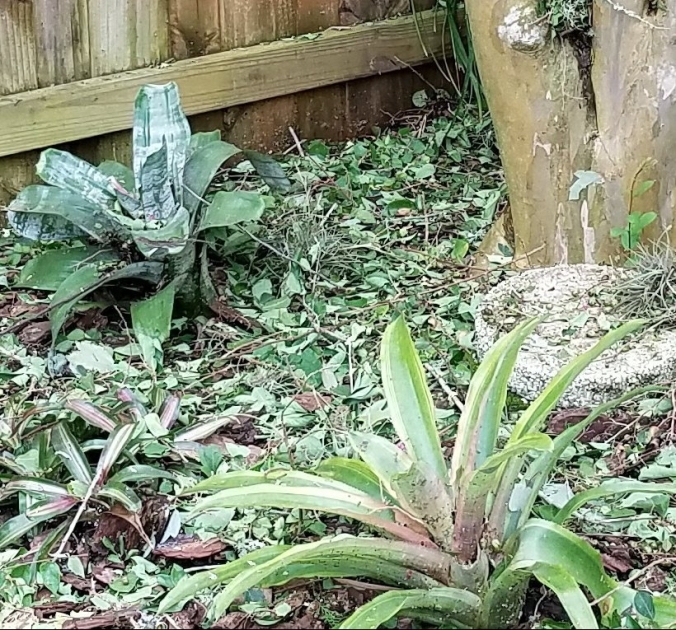 Maybe I don’t really want to remember. Maybe that’s why this is the only pic I took after the longest night ever. Actually, it was the longest 24 hours ever. She was just that huge. And she took her sweet time toying with us here in Orlando. Irma spent all day Sunday sending her terrifying tornadoes one after another, and drenching us with flooding rains before she even showed up for her own party. How rude.

But it’s over now. She’s gone. Finally exhausted herself. Finally. No more. Please. Thank you, God.

So, going outside for the first time that next morning … there were trees and limbs everywhere, obviously. We had a few roof shingles displaced, but thankfully, that was the extent of our structural damage. We were surprised by this after spending a long night listening to mysterious “things” hitting our house – we were actually picturing not even having a chimney up there anymore.

Our busy city was quiet for once that morning. No traffic noise in the distance, only crazy wind gusts accompanying the sounds of chainsaws and generators cranking up all around us. We were thankful for those lingering winds that day, they chased away our usual September heat and humidity. Ugh.

All of our neighbors made their way outside early that morning to check the damage, and check on each other. We gathered in the middle of the street for over an hour trading stories about how terrifying the night had been, and wondering how long we’d be without power.

Honestly, I think we were all just procrastinating in our exhaustion. Between being up all night, and dealing with the stressful previous week of wishing someone would just rip the bandaid off already, we were all pretty much toast from Irma, and we were just not ready yet to face the mess her fury had left behind.

Finally, reality beckoned and I went to the backyard to look around and start cleaning up. One limb I saw wasn’t just lying on the ground, though. It had been driven into the ground at a vertical angle. It just stood there. That’s how strong the winds had been. I literally had to pull it out of the ground like it had been planted there. And I guess, in a way, it had been.

I don’t know why, but for some reason, I didn’t snap a picture of this. I just kept picking things up. How unlike me. I take pictures of everything.

Then I stood up and looked up at the trees around me. My neighbor’s maple had been stripped of most of its leaves. Then I looked at my yard and realized that it was covered with an emerald carpet of not just maple leaves, but shredded maple leaves.

Think about that for a minute.

Such fury. Such power. Such fierceness. Such strength. That was Irma. This is our God who created her. Those shredded leaves were a mere glimpse of His sovereignty. A hint of His true magnificence. A reminder of His eternal authority.  And He allowed me to see it.

He commands the storms, no matter if their names are Irma, Harvey, or whatever else threatens to blow us away in this world. He absolutely directs their paths according to His perfect purpose. It may appear pointless from our human perspective, but He’s actually working great significance with every troubling gust.

It could be Lupus, cancer, or conflict. It could be unemployment, homelessness, or abandonment. Betrayal, exhaustion, grief, bankruptcy, earthquake, hurricane or even loneliness. Any and all of them – He allows them into our lives. For our good and for His eternal glory. Even if it doesn’t feel good, it’s working toward our ultimate, everlasting good.

Some get angry and turn away from a God who allows hardships. They sneer “How can He say He loves us while we struggle so???” They deny believing. They deny Him. They turn their backs and think they’re making it on their own, but the Giver of every breath we breathe begs to differ.

Just try inhaling without Him.

You don’t have to necessarily believe or want something for it to be true. No, you absolutely don’t. God commands the storms, but He also holds us through them. Whether we believe it or not, He does. Even when we shake Him off and reject Him … guess what??? He still holds us.

He promises this in scripture and this is what gives me the foundation of my faith. It’s not based on what I see, what I feel, or what’s been preached to me. My faith is based on what God has spoken directly to my heart through His Word. There IS no stronger foundation than that.

This is why and how I trust so deeply.

If you read the Bible at all, you can’t help but see that God has always been faithful to His promises, faithful to His people. He has never forsaken us, never forgotten us, and absolutely never left us alone to weather a storm. He never has, and He never will. Just read and see what I mean. Don’t take my word for it.

Sometimes it’s hard to understand the mysterious way He’s working in our suffering, but take heart. We can absolutely trust that He is working in it. And He is there with us.

We are firmly grasped in his powerful arms as He guides us to safety not necessarily around the storms, but directly through them instead.

And, by looking at the state of those leaves, I do believe He’s shown without a shadow of a doubt who possesses the power to protect us through any storm we may ever find ourselves in the midst of. We just have to learn to trust Him.

He loads the clouds with moisture; he scatters his lightning through them. At his direction they swirl around over the face of the whole earth to do whatever he commands them … Listen to this, Job; stop and consider God’s wonders. (Job 37:11-13)

“Peace I leave with you; my peace I give to you. I do not give to you as the world gives. Do not let your hearts be troubled, and do not be afraid.” (John 14:27)

3 thoughts on “On being Irma-shredded.”